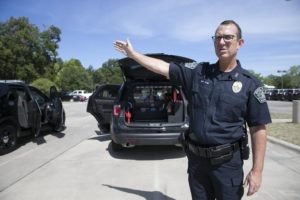 FROM THE AUSTIN AMERICAN STATESMAN

Two years ago, Travis County officials unveiled a $3.5 million software system to expedite the flow of evidence between local law enforcement agencies in criminal cases.
One aspect of the new technology — and one touted as particularly beneficial — was faster transmission of Austin police dash camera videos, including those in drunken-driving cases.
Instead, the process has slowed down dramatically.

For an array of reasons, the time it takes to send video footage from police to prosecutors now averages 10 months, creating a backlog of thousands of cases and sparking what officials call unacceptable delays in the justice system.

The lag is 13 times what it was two years ago, when it took staffers about three weeks to burn the video onto CDs for prosecutors to pick up.
Police officials believe a primary issue is that the new system — unlike the analog processes used by police before — requires a faster internet connection than is available at most police stations.

The result is that drunken-driving suspects now wait nearly a year before prosecutors review their cases to determine whether they will go forward or be dismissed — all while the most important evidence waits in a growing queue to be sent from one government office to another a couple of miles away. It also means some suspects might spend nearly a year with an unresolved accusation against them, only to have it later dismissed.

“It just stops justice from going forward,” said Travis County Court-at-Law Judge Elisabeth Earle, the presiding misdemeanor court judge. “And of course, justice delayed is justice denied, as we have all heard.”

Judges, prosecutors and defense lawyers told the American-Statesman they are not familiar with a defendant who has remained in jail because of video delays or pending cases that have crumbled because prosecutors did not yet have the video.

But officials say the issue is one of efficiency that they fear could slowly begin to undermine the public’s confidence in the local courts system.

“It’s a valid expectation that justice be swift and, from a victim’s perspective and a defendant’s perspective, that their cases be resolved in a timely manner,” said County Attorney David Escamilla, whose office handles the majority of drunken driving cases. “So to wait a year to get some kind of movement on your case, you get a lot of disappointed folks.”

County misdemeanor judges on April 16 signed a letter expressing their concern and saying they would support an effort to temporarily hire workers to help resolve the issue. As of last week, at least 2,600 videos dating back to June were awaiting transmission.

“These delays affect both pretrial confinement of defendants and the length of time it takes to resolve cases on our dockets,” the letter stated.

Officials attribute the increasing delay to a number of factors.

“It’s like the perfect storm that has come together, and we continually are getting more and more behind,” Austin Police Department Chief of Staff Troy Gay said.

One root of the delay, Gay said, is that technicians are handling a greater volume of video evidence, particularly with increased use of body-worn cameras. Last year, police officials received about 800 video evidence requests a month from prosecutors in criminal cases, compared with up to 1,750 per month so far this year.
“The amount of video footage that is being recorded on a daily basis just continues to double and triple,” Gay said.

At the same time, the unit responsible for gathering and transmitting the information has remained the same size with five full-time staff members. Gay said several months ago, as the backlog continued to mount, he asked to hire two temporary employees and is currently doing so.

Additionally, technicians are using a slow internet connection, Gay said. It might take 30 minutes to four hours to transmit videos in a single case.
The video delay affects more than drunken driving cases, although officials say that is where the issue is most pronounced.

Such footage is often a central piece of evidence in drunken driving cases, giving prosecutors and jurors a chance to evaluate whether a person appears intoxicated. But Austin police also compile video in other cases. For instance, video might show a crime scene or record an officer’s interview with a victim or witness at that scene.
Under the law, all footage in a criminal case must be gathered and shared with prosecutors and the defendant’s attorney.

Officials say they have stepped up efforts in recent weeks to address the matter as judges and prosecutors have grown louder in their criticism of the delays.
Gay said the department is planning to assign officers on injury duty to the task of compiling and sending videos. It also is exploring the possibility of moving the team to another location with faster internet connectivity.

Officials say their goal is to come up with a way to send the current influx of video as quickly as possible so the videos do not add to a backlog. Then they hope to start processing videos that have been waiting for months to be sent.

They do not yet have an estimate on how long until the issue might be resolved and all videos sent.

“It’s not a frill,” Travis County District Attorney Margaret Moore said. “It’s not, ‘Oh, we’d like it.’ This is absolutely essential to the administration of justice in Travis County.”